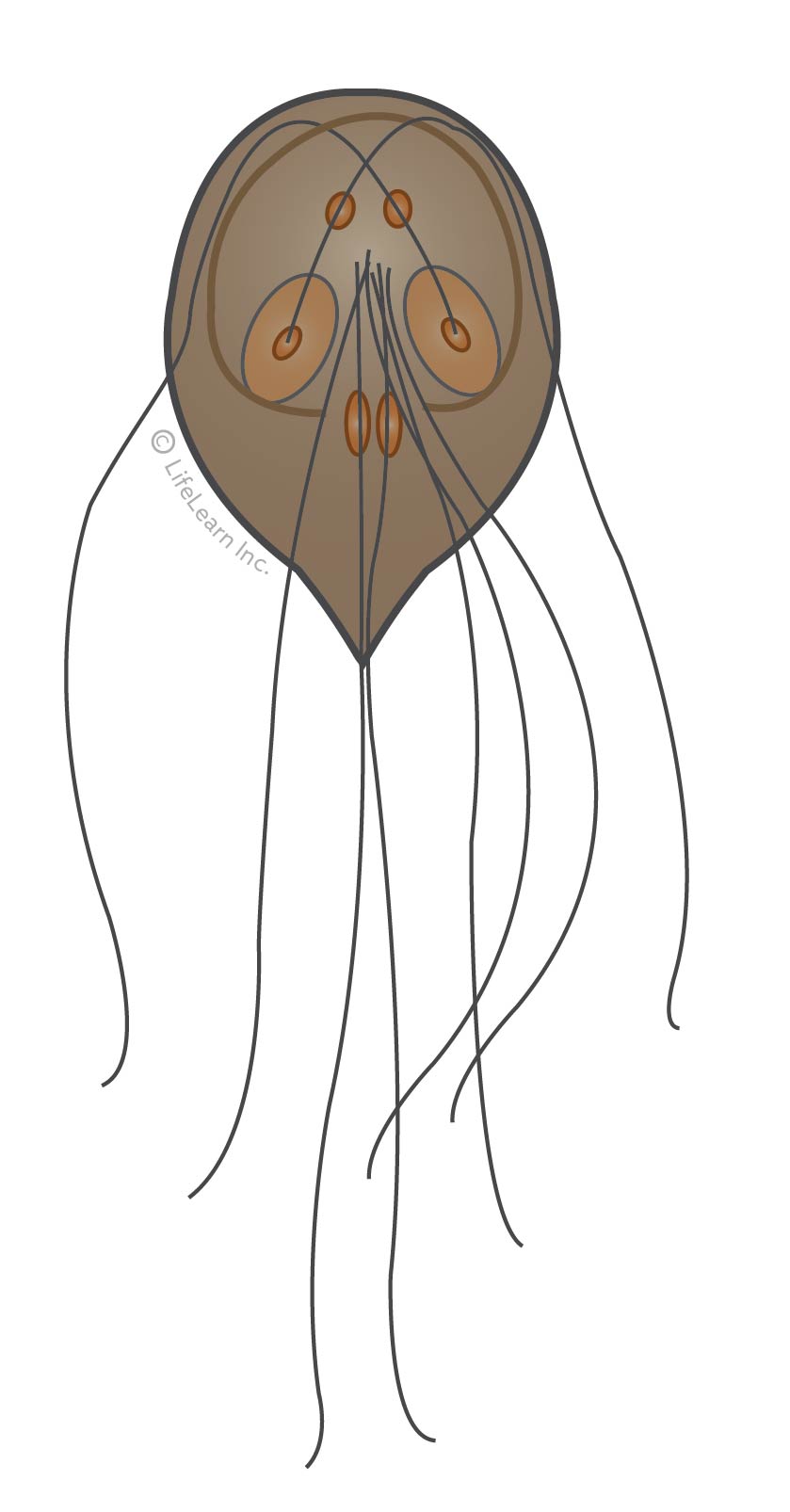 Giardiasis is an intestinal infection of humans and animals caused by a microscopic protozoan. It is a simple one-celled parasitic species, not a worm, bacteria, or virus. The parasite occurs worldwide and is a common cause of "Traveler's Diarrhea" in people. Outdoor enthusiasts who inadvertently consume contaminated water may develop "beaver fever", another name for giardiasis in people. Other examples of protozoan parasites that can cause enteric (intestinal) disease are Coccidia, Cryptosporidia, and Toxoplasma.

The Giardia organism has two forms. A fragile, feeding form known as the trophozoite exists in the gut of infected animals. A hardy cystic form is shed in feces and can survive several months in the environment, particularly in water and damp environments.

Giardiasis can be an important cause of diarrhea in animals and humans. However, many cats are infected without developing clinical signs, or the diarrhea is treated as 'non-specific'. Giardia infections in cats are undoubtedly more common than recognized or diagnosed.

How are cats infected with Giardia?

A cat becomes infected with Giardia after swallowing the cyst stage of the parasite. Once inside the cat's intestine, the cyst transforms into the "trophozoite" or feeding form of the organism and attaches to the intestinal wall to feed. If sufficient numbers are present, clinical signs of damage to the intestinal wall will develop. Trophozoites reproduce by dividing, and some transform into the cystic form. Eventually, the cat passes infectious cysts in its stool. The time it takes from ingestion of cysts to passage in feces is 5 to 12 days in dogs and 5 to 16 days in cats. These cysts are immediately able to infect another animal. Giardiasis can be transmitted by eating or sniffing the cysts from contaminated ground or drinking contaminated water.

"Giardiasis can be transmitted by eating or sniffing the cysts from contaminated ground, or by drinking contaminated water."

The disease is relatively rare in healthy adult cats. The likelihood of developing disease increases when large numbers of cysts are present in the environment from fecal contamination. It is more common in kittens and debilitated adult cats and often occurs in densely populated groups of cats, such as in a cattery, pet store, or animal shelter. Kittens shed more Giardia cysts in their feces than older cats.

What are the clinical signs of giardiasis?

These microscopic parasites attach themselves to the intestinal wall, and the damage causes an acute, sudden onset of foul-smelling diarrhea. Giardia infection in cats may lead to weight loss, chronic intermittent diarrhea, and fatty stool. The stool may range from soft to watery, often has a greenish tinge, and occasionally contains blood. Infected cats tend to have excess mucus in their feces. Vomiting may occur in some cases.

The signs may persist for several weeks, and gradual weight loss may become apparent. Diarrhea may be intermittent. Most cats do not have a fever but may be less active. The disease is not usually life-threatening but can be more severe in kittens, older cats, and cats with an immune system damaged by Feline Immunodeficiency Virus (FIV) or Feline Leukemia Virus (FeLV) infections or other serious illnesses. Many dogs and cats will be asymptomatic carriers, never developing any signs of illness. Younger animals are more likely to exhibit clinical signs.

How is Giardia diagnosed?

A routine fecal flotation test may fail to detect these tiny cysts, which are shed inconsistently in the feces and often require a special zinc sulfate flotation solution. Occasionally, the parasites may be seen on a direct smear of the feces. If your veterinarian suspects giardiasis, a stool sample may be analyzed for Giardia-specific antigens (cell proteins). Some Giardia tests are available for in-clinic use, while others require submittal to a reference laboratory. Many cases are presumptively diagnosed based on medical history and clinical signs suggestive of giardiasis.

What is the treatment for giardiasis?

Fenbendazole (Panacur®) and metronidazole are the most commonly used drugs to kill Giardia. These medications can be very bitter, so they are often manufactured in a coated tablet form. To get the correct dose for cats, the tablet must often be split, thus exposing the bitter contents. To make it easier to administer these medications, veterinary compounding pharmacies can be used to prepare them in flavored formulas that mask the bitterness. The treatment is given orally for five to seven days.

Fenbendazole and metronidazole may be used alone or in combination. The combination of the two drugs is usually administered to cats with refractory diarrhea (diarrhea that has not responded to treatment). Supportive treatment with other drugs may be needed as supplemental therapy if dehydration or severe diarrhea is present.

Your veterinarian will help determine the treatment best for your pet.

Because Giardia cysts are infective immediately when passed into the environment, feces should be removed quickly and disposed of. Infected animals should be bathed regularly to remove cysts from the hair coat.

What is the prognosis for giardiasis?

The prognosis is good in most cases. Debilitated or geriatric animals and those with incompetent immune systems are at increased risk for complications, including death. All pets diagnosed with Giardia should be re-tested two to four weeks after completion of treatment.

Can my cat give a Giardia infection to me or my family?

Giardiasis is the most common intestinal parasitic infection of man and can potentially be passed from cats to humans. In the past, it was assumed that cats, dogs, and wildlife were an important source of human infection. Genotypes or Assemblage A can infect humans, dogs, and cats, while B can infect both humans and dogs. However, human-to-human transmission is also a concern, and contaminated municipal water supplies are responsible for many outbreaks.

"Contaminated municipal water supplies are responsible for many outbreaks."

If your cat is diagnosed with giardiasis, environmental disinfection and good personal hygiene are essential to prevent accidental spread to humans. In particular, people with immunodeficiency, such as AIDS or cancer, or undergoing chemotherapy should use extreme care, especially when handling feces or litter or after administering medications.

For environmental disinfection, you can use chlorine bleach at 1:32 or 1:16 dilutions or 1-2 cups in a gallon of water (60-120 mL/L). However, be sure that the affected surfaces and premises can be safely treated with bleach. Lysol® and quaternary ammonium compounds (Parvosol®, etc.) are also reported to kill cysts effectively. Giardia cysts are susceptible to drying, so keep your environment as dry as possible. For best results, thoroughly clean the pet's living and sleeping areas and then allow the areas to dry out for several days before reintroducing pets.

© Copyright 2022 Lifelearn Inc. Used and/or modified with permission under license.

During regular business hours, we are happy to take medical emergencies for both existing clients and new patients – please call us prior to arriving so that we can prepare for your pets medical emergency.